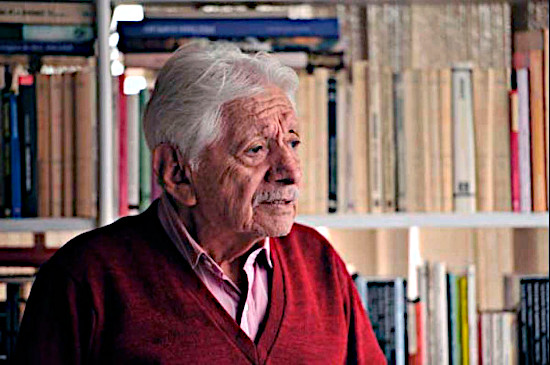 Efraín Jara Idrovo (Cuenca, 26 February 1926 – Cuenca, 8 April 2018) was an Ecuadorian writer and poet. Tragedy struck Idrovo in 1974, when his teenage son committed suicide. Idrovo expressed his sorrow in the form of a poem, “Weeping for Pedro Jara (structures for An Elegy),” which was published in 1978 and is considered one of Jara’s most important works. The Biographical Dictionary of Ecuador has called it “one of the greatest and most beautiful national poems ever written.” The poem is highly experimental, in that it was printed on a single 60cm by 70cm sheet of paper, divided into 15 sections, and can be read horizontally, vertically, or diagonally. He was president of the Azuay branch of the House of Ecuadorian Culture. In 1999, Jara was awarded the Eugenio Espejo Award, the nation’s highest literary honor.

Efraín Jara Idrovo was born into a wealthy family. His father, Salvador Jara Bermeo, was a merchant who exported straw hats. His mother, Idrovo Leticia Aguilar, was a professor of Castilian and a poet. Jara’s mother is the one who taught him poetry early on in his life. Jara was married to Atala Jaramillo Domínguez from 1955-1973 and to Alba Lara Jaramillo since 1983.

Several English translations have appeared of “Sollozo Por Pedro Jara,” including the following: