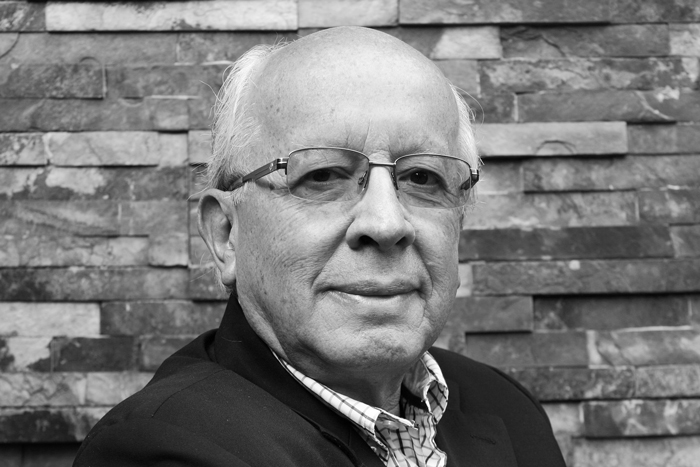 Gonzalo Ortiz Crespo (Quito, October 18, 1944) is an Ecuadorian journalist, essayist, historian and writer. He has written three novels: Los hijos de Daisy (2009), Alfaro en la sombra (2012) and Pecunia non olet (2021), a corruption thriller which made it to Primicia.ec’s 2021 list of “the 10 books by Ecuadorian writers that marked the year.” He is a member of the Ecuadorian Academy of Language and the National Academy of History. He wrote for the newspapers El Tiempo, Hoy, EL COMERCIO and the magazine Gestión. He has worked as a university professor and has held various posts such as secretary of communication, secretary of the administration of President Rodrigo Borja, and councilor of Quito.

Gonzalo Ortiz Crespo carried out his primary studies at the Borja I School, secondary school at the Loyola School and at the San Gabriel School and his bachelor’s degree in Classical Humanities was obtained at the Pontifical Central University of Ecuador (1972). He also holds a Postgraduate Diploma in International Relations and Development from the Institute of Social Studies in The Hague-Netherlands (1976) and a Master’s Degree in Social Sciences from the same institute (1977).

Throughout his professional career he has served as a chronicler of the newspaper El Tiempo (1967); Secretary of the Department of International Trade of the Central Bank of Ecuador (1968-1971); cultural editor at the magazine Mensajero (1969-1975); pro-secretary of the Monetary Board of the Central Bank of Ecuador (1971-1973); part-time professor at the Pontifical Catholic University of Ecuador (1972-1975; 1978-1979; 1982-1988, and 1995-2001); executive director of the Ecuadorian Development Foundation (1973-1975 and 1978-1979); part-time professor at the University of New Mexico (1978-1983); full-time professor at the Pontificia Universidad Católica del Ecuador (1979-1982); deputy dean of the Faculty of Economics of the Pontifical Catholic University of Ecuador (1980-1982); economic editor at the newspaper Hoy (1982-1985); columnist of the newspaper Hoy (June 1982-August 1988 and December 2011-August 2014); deputy director and editor-in-chief of the newspaper Hoy (1985-1988); National Secretary for Social Communication (August 1988-October 1989); Secretary of the Presidency of the Republic (October 1989-February 1991); Secretary-General of the Public Administration (February 1991-August 1992); regional director for Latin America at the Inter Press Service Agency (IPS) (October 1992-July 1995); general editor of the journal Gestión (since 1995); editorial columnist for the newspaper El Comercio (1997-2001); national news manager of Ecuavisa (April 1997-February 1998); professor at the Universidad Andina Simón Bolívar (April 1997-February 2002); news director at Telesistema (March 1998-April 2000); panelist of the program Análisis al fin de semana de Gamavisión (May-December 2000); advisor to the mayor of Quito (January-December 2001); coordinator of the leadership and social communication programs of the Esquel Foundation (January 2002-June 2003); metropolitan councilor of Quito (January 2003-July 2009); correspondent in Ecuador of the IPS Agency (December 2009-December 2011); Deputy Mayor of Quito (January 2009-July 2009); dean of the International University of Ecuador, Faculty of Social Sciences and Communication (April 2012- July 2014); columnist for the digital newspaper Plan V (2014-); member of the writing team of the texts of Social Sciences for 8th, 9th and 10th years of Basic Cycle of the Simón Bolívar Andean University and the National Publishing Corporation (2015); member of the editorial committees of the Selected Works of Germánico Salgado and of the Social History of the Media in Ecuador (UASB-Corporación Editora Nacional); coordinator of volume III (1960-2015) and editor of several chapters of the Social History of the Media in Ecuador (UASB-CEN), and research and writing of the history of the 25 years of the Esquel Foundation and communication advice for its 25th anniversary (2015). He is currently chairman of the board of directors of the Zoological Foundation of Ecuador (since 2012) and representative of the shareholders to the General Meeting of the Pichincha Mutual Society (since 2014).