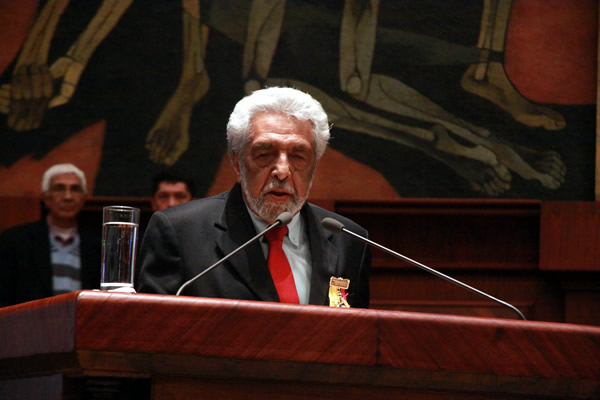 Jaime Alejandro Galarza Zavala (sometimes spelled Zabala) is an Ecuadorian writer, poet, journalist and polítician. He was born in Cuenca on July 28, 1930. He has published over 20 books, including books of poetry and non-fiction books, among which are: El yugo feudal (1962), Piratas del golfo (1973), Los Campesinos de Loja y Zamora (1973), El festín del petróleo (1974), Quienes mataron a Roldós (1982), Petróleo de nuestra muerte (1983). He served as the national vice president of the House of Ecuadorian Culture from 2008-2012. In 2007 President Rafael Correa awarded Galarza the Eugenio Espejo National Culture Prize. Among his friends were Julio Cortazar and Ernesto Che Guevara.

Publishing The Oil Feast, being a political prisoner, and getting help from Julio Cortazar

In 1972 Jaime Galarza Zavala published El festín del petróleo (The Oil Feast), which accused and implicated various high-level Ecuadorian politicians of corruption. Due to the publication of El festín del petróleo, Galarza was arrested by the so-called “Nationalist and Revolutionary” Government of General Guillermo Rodríguez Lara (Military Dictator/President of Ecuador 1972-1976).

The famous Argentine writer Julio Cortazar visited Quito, Ecuador between Jan 20-24, 1973 where he attended the launch of the magazine Frente Cultural Bufanda del Sol and presented his book El libro de Manuel, which analyzes Latin American politics. On his first day in Ecuador Cortazar visited Galarza, whose poetry and essays he so admired, at the Garcia Moreno Prison. Cortazar then wrote a letter to General Guillermo Rodríguez Lara expressing solidarity with Galarza and asking for his release. The letter was co-signed by other important literary figures and intellectuals such as Mario Vargas Llosa, Gabriel García Márquez, Jean Paul Sartre, Simone de Beauvoir, Regis Debray, and Miguel Ángel Asturias. This attention greatly improved Galarza’s situation; he was moved to a better cell and the treatment of him was improved.

These events are narrated by Julio Cortazar in a letter sent to the Argentinian writer Francisco Urondo and published in Liberation in 1973. Cortazar concludes thusly: “I left, of course, but I left knowing that somehow I was not leaving, and that Jaime also went with me in that area of ​​the heart that is forever safe from fences, bars and hatred.”

Thanks to Julio Cortazar’s letter a few months later Galarza’s trial and sentence were annulled and he was set free.

General Guillermo Rodriguez Lara, President of the Republic of Ecuador

… Jaime Galarza, the author of the book EL FESTIN DEL PETROLEO, which shows with abundant documentation and data the dangers that loom over the Ecuadorian economy, in the face of foreign attempts to monopolize the country’s immense oil wealth.

… All the specialists in these matters, both in Latin America and in Europe, have recognized the extraordinary merits of Galarza’s work, as well as its significance in a plan of defense for his homeland. For these reasons, the arrest and conviction of Jaime Galarza, within a context of events and legal actions that are far from clear, today move us to address you …
Jaime Galarza must be allowed to freely continue his outstanding work…

Signed by Julio Cortazar and others

Philip Agee was a Central Intelligence Agency (CIA) case officer and writer of the 1975 best-selling book, Inside the Company: CIA Diary. Among his assertions and claims, Agee describes his first overseas assignment in 1960 to Ecuador, where his primary mission was to force a diplomatic break between Ecuador and Cuba. He wrote that the technique he used included bribery, intimidation, bugging, and forgery. Agee spent four years in Ecuador penetrating Ecuadorian politics. He stated that his actions subverted and destroyed the political fabric of Ecuador.

Jaime Galarza Zavala speaks about who may have killed Jaime Roldos

In 1981 the President of Ecuador Jaime Roldos Aguilera, his wife and cabinet members were killed in a mysterious plane crash. In 1982 Jaime Galarza Zavala published a book titled Quiénes mataron a Roldós (Who Killed Roldos). In the following video, Galarza talks about who may have killed Jaime Roldos, and about his asking investigators to re-open the case 38 years later. Most Ecuadorians believe Roldos was assassinated by the CIA. Four other leftist Latin American leaders, including President Omar Torrijos of Panama, died in mysterious plane crashes within a 3 month period. In the video, Galarza says that apart from the CIA, the Mossad of Israel may have also been involved.