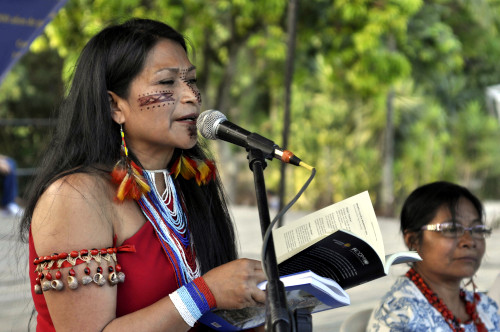 María Clara Sharupi Jua (Morona Santiago, 1964) is an Ecuadorian writer, poet, and translator, who writes in Spanish and Shuar, an indigenous language of Ecuador’s Amazon basin. She writes poetry in Shuar, while translating it into Spanish in order to reach a wider audience. She co-wrote the book “Amanece en nuestras vidas” (2011), the first anthology of poetry from Ecuadorian indigeneous women writers, and wrote the short story collection “Tarimiat” (2019), which was written in Shuar, Spanish, and English. Sharupi Jua also works as a translator and radio and television presenter in Shuar and Spanish. She was a member of the translation team that worked on the official Shuar translation of Ecuador’s Constitution. She lives in Quito, where she has also worked for the Ministry of Foreign Affairs and Migration on indigenous issues.

Her poems are included in the following anthologies.

She has also published a book of short stories.