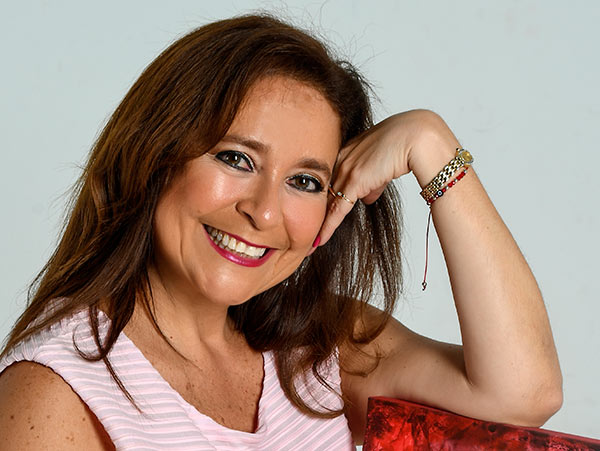 Karina Galvez (Guayaquil, July 7, 1964) is an award-winning poet with Ecuadorian and American citizenship. She has lived in Orange County, California since 1985. In 1995, she published her book “Karina Gálvez – Poesía y Cantares”[Karina Galvez – Poetry and Songs], which includes both English and Spanish versions of her poems with a prologue written by León Roldós Aguilera, Ecuador’s former vice president. She is also a songwriter and author of children’s poems and short stories. Her Spanish poems have been translated into English, French, Italian, Portuguese, Romanian, Bulgarian, Slovene, and Czech.

Karina Gálvez’ poetry is mostly romantic, but she frequently surprises the reader with poems and prose poetry that reflect an acute perception of social issues such as abortion, social class clashes, social turmoil, and lack of tolerance, or with poems of profound historical content, such as her epic poem “La Batalla del Pichincha,” or about Catholic beliefs, such as her poem “Ave, Mi Guadalupana,” which tells of the apparitions of Our Lady of Guadalupe, or with eco-poems (poems about the ecology), tongue-twisters, and even ‘culinary poems’ containing traditional Ecuadorian recipes in rhyme.

Karina Galvez comes from a long line of poets, intellectuals and illustrious Guayaquileans dedicated to the service of the community. She is the daughter of Daddy Gálvez Mora, who was Commander of the Meritorious Fire Department of Guayaquil. She is the great-niece of Arnaldo Gálvez Usubillaga, former Municipal Secretary of Guayaquil in 1926, and Ecuadorian National Chess Champion in 1921, who in 1923 published “Algo de Ajedrez,” [Some Chess] a 444-page book, which was the first book of its genre published in Ecuador and has become a classic of national letters.

“Poesía y Cantares” (“Poetry and Songs”). Poetry book published in 1995 by Ecuadorian poet Karina Galvez. It contains English and Spanish versions of Galvez’ poems. Foreword for the book was written by Leon Roldos Aguilera, former vice-president of Ecuador. 106 pages. Most poems are love poems, but poems about Guayaquil, California, and children’s poems were also included.