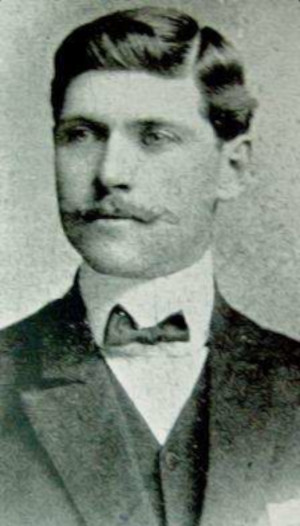 Alfonso Moscoso Sánchez (Ambato, January 22, 1879 – Quito, June 26, 1952) was an Ecuadorian poet and history professor. He belongs among the first writers to use modernismo in their poetry. Graduated in jurisprudence, he held the positions of Minister of the Supreme Court of Justice, Deputy, and Private Secretary of General Leónidas Plaza during his presidency. Although few of his poems exist, they are masterfully written. A modest and simple man, he was always reluctant to publish his poems. Most of his production is found in the books Vidriecitos de colores (1945) and Azabaches (1951). His famous poems are: “Los Aserradores,” “Suspirillos germánicos,” “Saudade,” “El viejo de la esquina” and “Relieve.”

His father was Gabriel Moscoso Suárez, a lawyer and teacher at the Bolivar School (colegio Bolívar). His mother was Isabel Sánchez Cevallos. His paternal grandparents were Dolores Sevilla Suárez and Francisco Moscoso Castillo, a great educator and a very close friend of Juan Montalvo, becoming his personal delegate in Ambato for the management of his personal affairs.