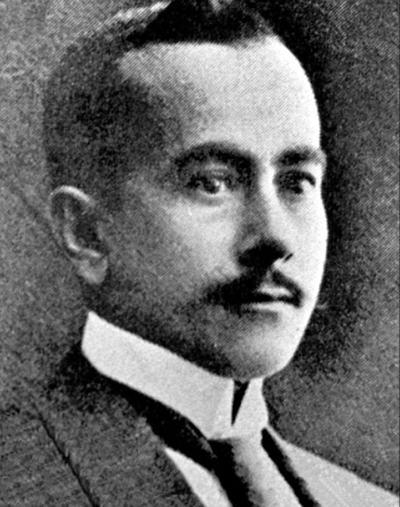 Carlos Alberto Rolando Lobatón (Guayaquil, September 13, 1881 – Guayaquil, January 5, 1974) was a doctor, writer and bibliographer. In 1925 Rolando was appointed library director at the University of Guayaquil and also became a numerary member of the National Academy of History. In 1930 he established the Guayaquil Historical Research Center. The National Authors Room of the Municipal Library of Guayaquil bears his name.

He attended high school at the San Vicente School (now named the Vicente Rocafuerte School) with a major in philosophy and literature. Once graduated, he traveled to Quito to enter the School of Chemistry and Pharmacy. He graduated as a doctor on November 6, 1905. A year later he entered the University of San Marcos in Lima, Peru for post-graduate studies.

He was a member of the following institutions

He shared his personal library with the city of Guayaquil

On May 24, 1913, he made his personal library available to the Guayaquil public. It was made up of more than 1,300 books, 3,200 brochures in 200 volumes, 712 newspaper and magazine collections with more than 40,000 copies and 3,800 loose pages. For this generous gesture the Municipality of Guayaquil conferred on him a Gold Medal. At this time he prepared and published his “Catalog of the National Bibliography of Dr. Carlos A. Rolando,” for which he was made a Corresponding Member of the Society for American Studies of Quito.

This is a partial list of his bibliographic works.