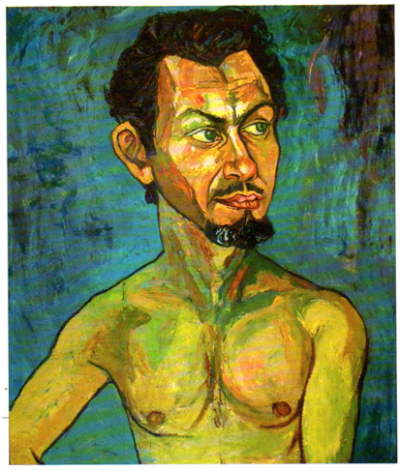 Humberto Lalot Rivadeneira Plata was born in Esmeraldas, Ecuador on April 14, 1929. He was the second of four children born to Mara Libia Plata Torres and Victor Rivadeneira Ricardelli, a military ally of General Eloy Alfaro. His siblings were Guizot, Guido and Adalgiza.

Later Moré had a second wife named Iris Rendón who stayed by his side until he passed away.

In 2011, Moré’s son Leonardo Rivadeneira Chaw released an artistic retrospective on his father’s work entitled “Humberto Moré and his Signology.” Humberto Moré’s other son Tony Moré is also an artist.

In his twenties, he chose the pseudonym Moré by combining the names of the French painters Claude Monet, Édouard Manet, and Pierre-Auguste Renoir.

Moré was in New York in June 1984 when he discovered he had cancer. When he returned to Guayaquil, he underwent surgery to remove the cancerous tumor that had invaded his body. He died in Havana, Cuba of cancer in 1984 where he had gone to undergo treatment. His second wife Iris Rendón was by his side during his final days. His remains were later transported back to Ecuador by his brother Guizot Rivadeneira.

Images of Artwork by Humberto Moré

Portrait of Humberto Moré by Villafuerte