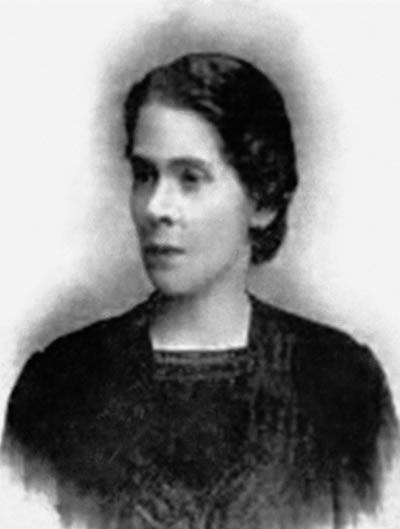 Mercedes G. de Moscoso, born Mercedes González Tola, also known by the pen name Rosa del Valle (Guayaquil, October 12, 1860 – October 23, 1911) was an Ecuadorian poet, playwright, activist and feminist. She is known as the greatest exponent of Ecuador’s second romanticism, she was notable for her poetry and plays. The majority of her poetry is contained in the books, Cantos del Hogar (1909) and Rosas de Otoño (1911). She wrote three plays, Abuela (1903), Martirio sin culpa (1905), and Nobleza (unpublished). In 1905 she collaborated with Zoila Ugarte and Dolores Sucre in La Mujer , the first feminist and suffragette magazine in Ecuador. Her brother was the poet Nicolás Augusto González.

Mercedes González was born in Guayaquil on October 12, 1860, daughter of Guadalupe Tola Dávalos from Guayaquil and Nicolás González Navarrete from Ambato. From 1865 to 1875 she lived in Lima, Peru with her parents, where she formed the dramatic spirit in her writings. In Quito in 1890 she edited a pamphlet called Reminiscences, this text earned her the nickname of “Heir to the great lyricism of Dolores Veintimilla de Galindo.”

She was married to Aurelio Moscoso and they had a daughter named Maria.

Her works have been included in the following anthologies of writers