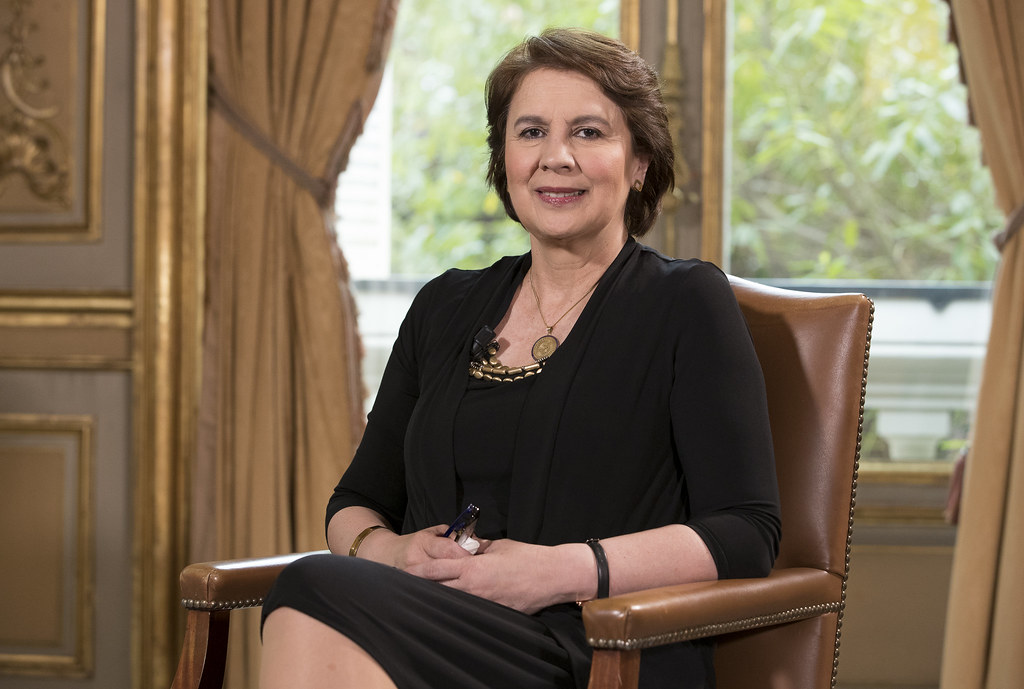 Rosalía Arteaga, born Lupe Rosalía Arteaga Serrano (Cuenca, December 5, 1956) is an Ecuadorian social activist, writer, and politician. She served as president of Ecuador between February 6-11, 1997. She was the first woman constitutional president and vice president of Ecuador. She co-authored the book “Alto Cenepa: los frentes de una guerra,” (1995) and wrote the book “La Presidenta, el secuestro de una propuesta” (1997). Her best known book is “Jerónimo,” which has gone through 8 editions in Spanish, 2 in English, and 1 in Chinese, Braille, Portuguese, Italian and a bilingual edition in Spanish/Portuguese. A continuation, “Los otros Jerónimos,” was published in 2002, with a prologue by the Spanish writer Rosa Montero. She has also written children and youth literature. She currently lives in Quito, Ecuador.

Rosalía Arteaga was appointed Vice President in 1996, following the election of Abdalá Bucaram as President. [4] However, Congress deemed President Bucaram unable to govern on February 6, 1997. Because the constitution was imprecise on the topic, Arteaga and legislative leader Fabián Alarcón were embroiled in a feud about who should succeed Bucaram. Initially, Alarcón was sworn in with the approval of Congress. On February 9, however, Arteaga, who had maintained as vice president that she should become president, was inaugurated in as Ecuador’s first female president. However, two days later, on 11 February, with the assistance of Congress and the army, Alarcón was sworn in anew, and Arteaga resigned as president and returned to her position as vice president. Arteaga continued to battle with Alarcón and resigned as vice president in March 1998. She then stood for President in the May 1998 elections, but won only 3% of the vote.

Rosalía Arteaga served as secretary-general of the Amazon Cooperation Treaty Organization until 2007 and is a member of the Encyclopaedia Britannica editorial board. She continues to receive an annual lifetime pension of $48.690 from the Ecuadorian government. Arteaga announced her desire to run for Secretary-General of the United Nations in the 2021 election with the assistance of the civil society movement “Forward.” However, current Secretary-General António Guterres was re-appointed for a second straight term.

She was married (and later divorced) to Pedro Fernández de Córdova Álvarez, ex mayor of Cuenca, they had 4 children: