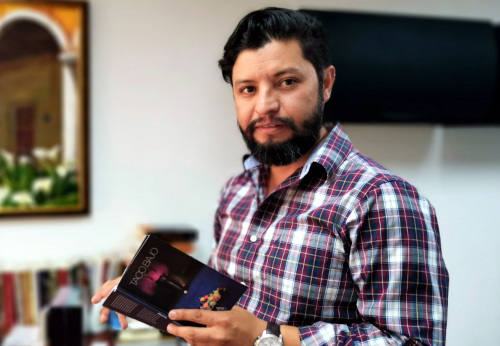 Santiago Vizcaíno Armijos (Quito, 1982) is an Ecuadorian poet, novelist and short story writer. He has a degree in Communications and Literature from the Catholic Pontifical University of Ecuador (PUCE). He has worked as an editor at the newspaper Hoy, the Office of Publications of the House of Ecuadorian Culture, and the magazine Nuestro Patrimonio (Our Patrimony). In 2008 he published his first book of poetry, Devastacíon en la tarde (translated into English by Alexis Levitin as Destruction in the Afternoon) and a book-length study of the Argentine poet Alejandra Pizarnik, both of which received awards. In 2015, La Caída Editorial published a bilingual version of his short story collection “Matar a mamá/Matricide” with the English translation by Kimrey Anna Batts. In 2017 Vizcaíno published his debut novel Complejo. His second novel Taco bajo was published in 2019. Vizcaíno is currently the Director of the PUCE Center for Publications.