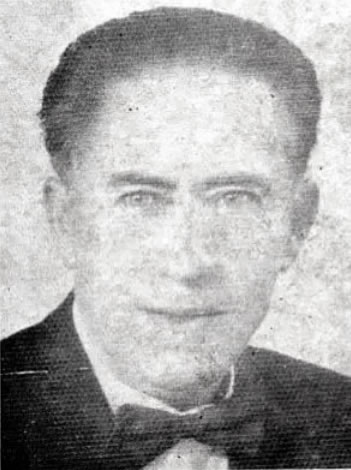 Jorge Cevallos Calero (Portoviejo, December 2, 1898 – August 20, 1968) was an Ecuadorian poet. In the 1920’s he formed part of the ”Argos” generation, an important literary group from Portoviejo. In 1950, he became a member of the Ecuadorian House of Culture in Manabi. In 1965, he created and presided over the Grupo Cultural Manta [Manta Cultural Group], which was very active in those years. He was bestowed the Flor Natural for his “Canto a Portoviejo” [Song to Portoviejo]. The poet Horacio Hidrovo Peñaherrera, being Mayor of Portoviejo, erected a bust in Cevallos’ memory, recognizing him as a universal poet “always attentive to the great events of humanity.” Today a school in Manta bears his name, as well as a park and garden in Portoviejo.

His was born to Roberto Cevallos, accountant, merchant, language teacher at the Olmedo School, owner of an ice factory in Portoviejo and a man of vast culture, as he was a good reader and spoke and wrote correctly in English and French, and Dolores Calero Barreto, both born in Portoviejo. He was the second of their eight sons.

In the 1920’s he belonged to a bohemian literary group called “Dad,” with whom he spent time drinking and reading, and whose members included: Vicente Amador Flor, Horacio Hidrovo Velásquez, Verdi Ceballos Balda and Antonio Falconí. Later, with these same friends, he formed the “Argos” generation, named after a cultural magazine that appeared for a short period in Portoviejo, which made them known within Ecuador. His friend Verdi once called him: “El hombre de los tragos blancos y los sueños negros” [the man of white drinks and black dreams].

After graduating in Accounting he traveled to Quito and Guayaquil cultivating literary friendships, particularly in the capital where he had a large group of friends in the Plaza de la Independencia. In 1923 he published criticism in “Fray Gerundio,” a periodical of scathing irony and vile humour that was well received in Portoviejo. During this time, he wrote for several magazines and periodicals and worked as an accountant for some Chinese companies.

In 1938 he received the Chilean poet Gabriela Mistral (winner of the 1945 Nobel Prize in literature) on her way to the north and presented her in an unforgettable literary evening before numerous Manabites who had the privilege of meeting and speaking with her.

He was married to Noemí Murillo Hidrovo with whom he had 6 children.

At the beginning of 1967 he began to feel discomfort in his bronchial tubes and after several unsuccessful treatments he was taken to the Modern Clinic of Dr. César Serrano in Guayaquil, where he was diagnosed with fungus, although in reality it was emphysema. He spent three months in isolation, he suffered from kidney failure and died at half past two on the morning of August 20, 1968, leaving behind a notebook of handwritten poems, some of them later published in a tiny 48-page pamphlet.