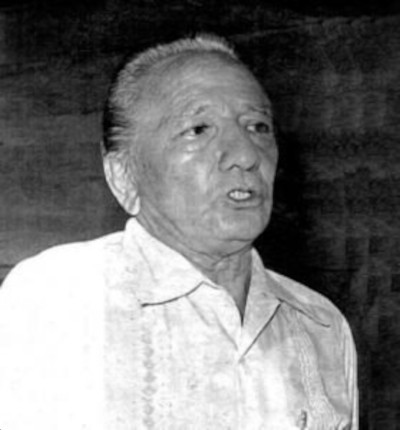 Pedro Jorge Vera (Guayaquil, June 16, 1914 – Guayaquil, March 5, 1999) was an Ecuadorian journalist, novelist, short story writer, playwright, poet, university professor, and a politician from the Communist Party of Ecuador. He published and contributed to several controversial newspapers and magazines, such as “La Calle”, with the writer Alejandro Carrión, and “La Mañana”. He remained throughout his life a close friend of Cuban president Fidel Castro. Vera was the paternal uncle of Prima Ballerina Noralma Vera Arrata.

Pedro Jorge Vera was born in Guayaquil, Ecuador, on June 16, 1914, as the legitimate son of Alfredo R. Vera Benavídes and Leonor Vera Almendares.
His father was a lawyer born in Naranjal and raised in Guayaquil who rose to become Prosecutor of the Guayaquil Superior Court of Justice. His mother was also the granddaughter of the first director of the Guayaquil Municipal Library and the daughter of a lawyer, Dr. Pedro José Vera, who became a deputy. His paternal grandfather, Mr. Manuel María Vera, a philanthropist from from Manabí who lived in Naranjal, donated a gold and bronze cast bell to the church of Naranjal, which was brought from Switzerland. The town established a school that bears his name. When Manuel María died, the people of Naranjal honored him with a privilege that was only granted to Presidents of the Republic at the time, and he was buried inside the Naranjal church. Disregarding the wishes of the town, a Catholic priest with the surname Lasso ordered that the remains be removed from the church and buried elsewhere in 1970.

Pedro Jorge Veras affiliation with the Communist Party of Ecuador (PCE) defined both his political life and his work. As a member of said political party, he was a delegate to the 1944 Constituent Assembly, where he also served as Secretary General.

Pedro Jorge Vera founded his first weekly with Alfredo Pareja Diezcanseco. It was titled “España Leal” and supported the Republic, but he only managed to publish two issues of the magazine before he was taken prisoner. In 1958, Pedro Jorge Vera co-founded the magazine “La Calle” with Alejandro Carrión, through which he published articles critical of Ecuador’s dictatorial regime.

During a trip to Cuba in 1960, Vera met Che Guevara and had a private audience with him. Upon his return, he founded the left-wing magazine “La Mañana” and became Ecuador’s most ardent supporter of the Cuban Revolution. During the same year, he visited China and Russia with writer Jorge Icaza and painter Oswaldo Guayasamín. He interviewed Mao Tse Tung and Nikita Khrushchev before traveling to Prague and other European capitals. By the time he accepted his first university chair at Ecuador’s Central University, his ideology had evolved from communist to Marxist-Leninist.

After serving time in prison during the dictatorship of José María Velasco Ibarra, Vera founded the magazine “Ecuador 70” in 1970. In 1977, he published “El Pueblo soy yo” and the poem “Recado al Gran Viejo” based on his experiences during Velasco’s dictatorship. It concludes with the famous phrase “Alfaro Vive Carajo.”

Pedro Jorge Vera’s first collection of poems, “Nuevo Itinerario,” was published in 1937. He traveled to Quito in 1938 and established the “General Publications Agency,” which published some of his works. His first story, “Hacia la escuela,” was published because José de la Cuadra thought it was excellent and recommended it to an editorial. When Joaquín Gallegos Lara died in 1947, Vera wrote a sonnet in his honor.

During the dictatorship that began in 1963, Vera went into exile in Chile, where his first wife died of cancer. In 1964 he married the Guayaquil writer Eugenia Viteri Segura. Together they visited Pablo Neruda and Salvador Allende in their respective vacation homes. In that country he published two books until his return to Ecuador in 1966.

Pedro Jorge Vera died of cancer, in his native Guayaquil, on March 5, 1999. His ashes were scattered in the Guayas River and thrown into the Pichincha volcano.

His work has been included in the following anthologies