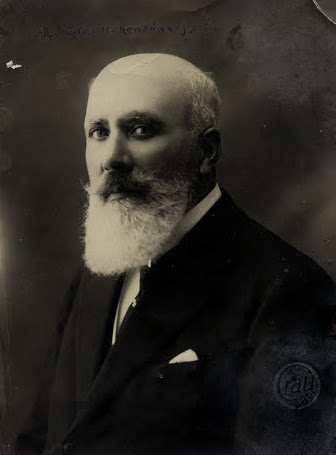 Rendón graduated from the University of Paris with a medical degree, with a thesis titled “Fièvres de surmenage” (Fevers of Overwork) which was published in 1888. In 1889 he returned to Guayaquil to practice medicine.

Rendón was appointed the Consul General in Paris by the President of Ecuador Eloy Alfaro in 1895. Between 1903 and 1914 he served as Minister Plenipotentiary of Ecuador to the governments of France and Spain, and in 1907 he was a delegate to the Second International Conference of The Hague. He was a member of the International Permanent Court of Arbitration and the International Red Cross. In 1914 he was sent to Barcelona to direct the building of the monument to commemorate the heroes of the “October 9 Battle”, for which his name is engraved in the pedestal of its column.

Rendón’s father Manuel Eusebio Rendón Treviño was a writer and his mother Delfina Pérez Antepara was an artist. He got his first books to read from his mother and his maternal aunt Carmen Pérez de Rodríguez Coello who was a poet and playwright.

He was married to María Seminario Marticorena with whom he had five children: