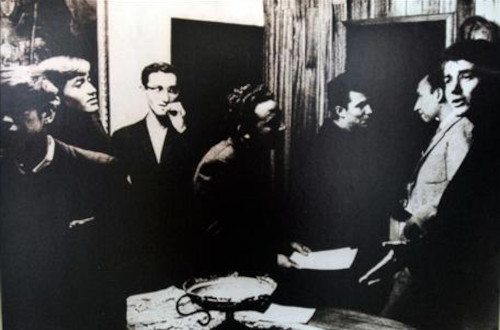 Tzantzismo was a cultural movement from Ecuador’s 1960s. It was founded in Quito by Marco Muñoz and Ulises Estrella, while the rest of the members came together throughout the decade. They were influenced by other Ecuadorian intellectuals such as Jorge Enrique Adoum, César Dávila Andrade and Agustín Cueva. Tzantzismo was expressed primarily in poetry, and to a lesser extent in fiction and theater. This literary revolutionary movement emerged in response to an alleged degradation and gentrification of Ecuadorian literature. An important book on the movement’s history was written by author Susana Freire García.

The Tzántzicos, which in English means Shrinkers of heads, started meeting at the home of painter Eliza Aliz (birth name Elizabeth Rumazo) and her husband, Cuban painter René Aliz. Later, on Friday nights, the Tzántzicos would gather at the Águila de Oro Cafetería, which they renamed 77 Cafetería, to discuss poetry, politics, and other cultural issues.

The Tzántzicos were revolutionary in both their art and their policies. Ral Arias, whose collection of poetry “Poesia en bicicleta” is considered one of the best examples of Tzantzismo, is one of the movement’s most prominent representatives. Due to ideological differences among its founders, the movement was dissolved in 1969.

The Shuar term “maker of tzantzas” means to cut and shrink an enemy’s head to show it outside as a sign of victory and power.

Notable members of the Tzántzico group:

The Tzántzico cultural movement has a prominent role in the novel La disfiguración Silva, published in 2015 by the Ecuadorian writer Mónica Ojeda and winner of the ALBA Narrative Award. In the book, the protagonists obtain an enigmatic script for a film supposedly written by Gianella Silva, a screenwriter and the only woman member of the Tzántzico cultural movement, who history had forgotten.